Today I have my first thermal polish to show you. This was a quick swatch and I learned right away that it is very important to love both the hot and cold spectrum of a thermal otherwise you will be disappointed!

a thermal changer that when cold is a bright pink with gold shimmer, and when warm is gold

Shown is 2 coats of 24Karat Rose over Duri Rejuvacote, no top coat. As I was putting the polish on I immediately knew it wasn't going to work out for me. In the bottle the shade is such a gorgeous pink with gold shimmer. As soon as I started to apply it turned to the sheer champagne gold. While this is a beautiful shade, it just does not suite my skin tone whatsoever. I had hoped the bottle (cold) shade is what would be predominant but apparently even my cold hands are indeed warmer than I thought so the gold took over. So this is another that had to go to my rehome pile and now I am on a search for a nail polish that looks like what you see in my 3rd photo! :)

I still have a couple of other Liquid Sky Lacquers that I am super excited to try! And even though this one didn't work for me I have seen some other ladies pull it off beautifully!

So before I removed Zoya Neely I decided to still go ahead and try out Britney Spearmint over it since that was my main goal in painting my nails with it to begin with. Ignore the previous chips please. :)

Shown is just 1 coat of Britney Spearmint over my Zoya Neely mani. While this is a very me color there was a bit of frosty/pearly-ness to the finish that I just didn't like. It is hard to see in the photos but was much more noticeable in person. With that said I did end up rehoming it immediately after trying it. I just know it was one that I wouldn't wear again and I would rather see someone else get to enjoy it. This is a lovely color but I have so many other mint holos that I simply adore!

So this is another one of those manis that I forgot to take a photograph, oops! I was about to remove it after a few days and many chips but figured I should probably still take a couple pics of it. So this is your warning to skip this post if you can't stand seeing an imperfect mani! :)

Zoya Neely is described as:

a full coverage earliest spring green in a glossy creme finish. A fun color in a muted finish gives a cool vintage look!

Shown is 2 coats of Neely over Duri Rejuvacote and topped with HK Girl. Flawless application, definitely a true creme! My only bummer was how quickly it started to chip! I painted my nails before I went to bed and when I was at work the next morning it had already chipped. Sadly I also had some peeling on my middle finger (not the fault of the polish) that just made the chipping worse. I actually put this on with the intention of using it as a base for Enchanted Polish Britney Spearmint but once I put it on I fell in love with the shade and wasn't prepared to cover it up!

I am so excited to show you this mani! I am so happy with not only this polish but my nails and my pictures aren't half bad either! ;)

This is a polish that I overlooked for the longest time. I ordered it for a friend and immediately fell in love once I saw it in person! Needless to say I ended up keeping the original one I ordered and had to order another one! Girly Bits Arctic Sunrise is described as:

Sky Blue, with a fantastic pink shimmer that is not shy at all!

Shown is 2 coats of Arctic Sunrise over Duri Rejuvacote and topped with HK Girl. This was perfect in 2 thin-ish coats and applied flawlessly! I barely needed to do any clean up and I love that I didn't end up with any shimmer left behind from the little clean up that I did do. That pink shimmer in person is so so so pretty! I tried to capture it but pictures truly don't do this polish justice. I love how bright this blue is and this is another polish that got me plenty of compliments from my customers! I'm so glad that I ended up owning this beauty!

I hope you all are enjoying your weekend so far! First off just want to apologize for the complete lack of photos of today's polish! This is a beauty and deserved so much more but I totally failed!

Liquid Lacquer Dazed and Confused is described as:

A light grey with a subtle holo shimmer

Shown is 2 coats of Dazed and Confused over Duri Rejuvacote and topped with HK Girl. I absolutely love this polish! Application was great and I was really impressed that it only needed 2 coats! The holo was very faint and really only visible in the sun but I loved the color nonetheless. I got quite a few compliments on my nails while wearing this at work, it's funny how surprised people are when you tell them you do your own nails! :)

So I am super late on this post but still wanted to share my Superbowl nails! Since I was born and raised in Washington it only made sense for me to root for the Seattle Seahawks, even if I am not a huge football fan! I will admit I did follow the team quite a bit this season though and was definitely very excited for them to finally win a Championship!

I took these photos a couple of days after I polished so I apologize for the chips and also the lack of good photos! I almost didn't post this at all but I felt like I should still share! Yes, it is another Colors by Llarowe polish! Of course I had to have it since it is for my home team! There is another polish in the duo called Legion of Boom which is also gorgeous and will have it's own post eventually! Seahawks Lime is described as:

Shown is 2 coats of Seahawks Lime over Duri Rejuvacote and topped with HK Girl. I was actually really surprised that 2 coats was necessary! I always do 2 but have found that most CbL polishes are opaque in 1. This was an exception! No big deal though since I would have done 2 anyways! This wasn't quite the Seahawks' lime green in my opinion but it is still a gorgeous green holo and I am happy to have it in my collection!

Just a quick post for you tonight before I go to sleep! :)

I have accumulated quite a few colors from Elevation Polish but this is the very first one I have ever worn! Epidote is described as:

Shown is 2 coats of Epidote over Duri Rejuvacote and topped with HK Girl. Application was great and I can't wait to try out more of them! I love the holo even though it isn't as strong as some of the others I have posted lately. I really like this color, it is definitely unique in my collection! 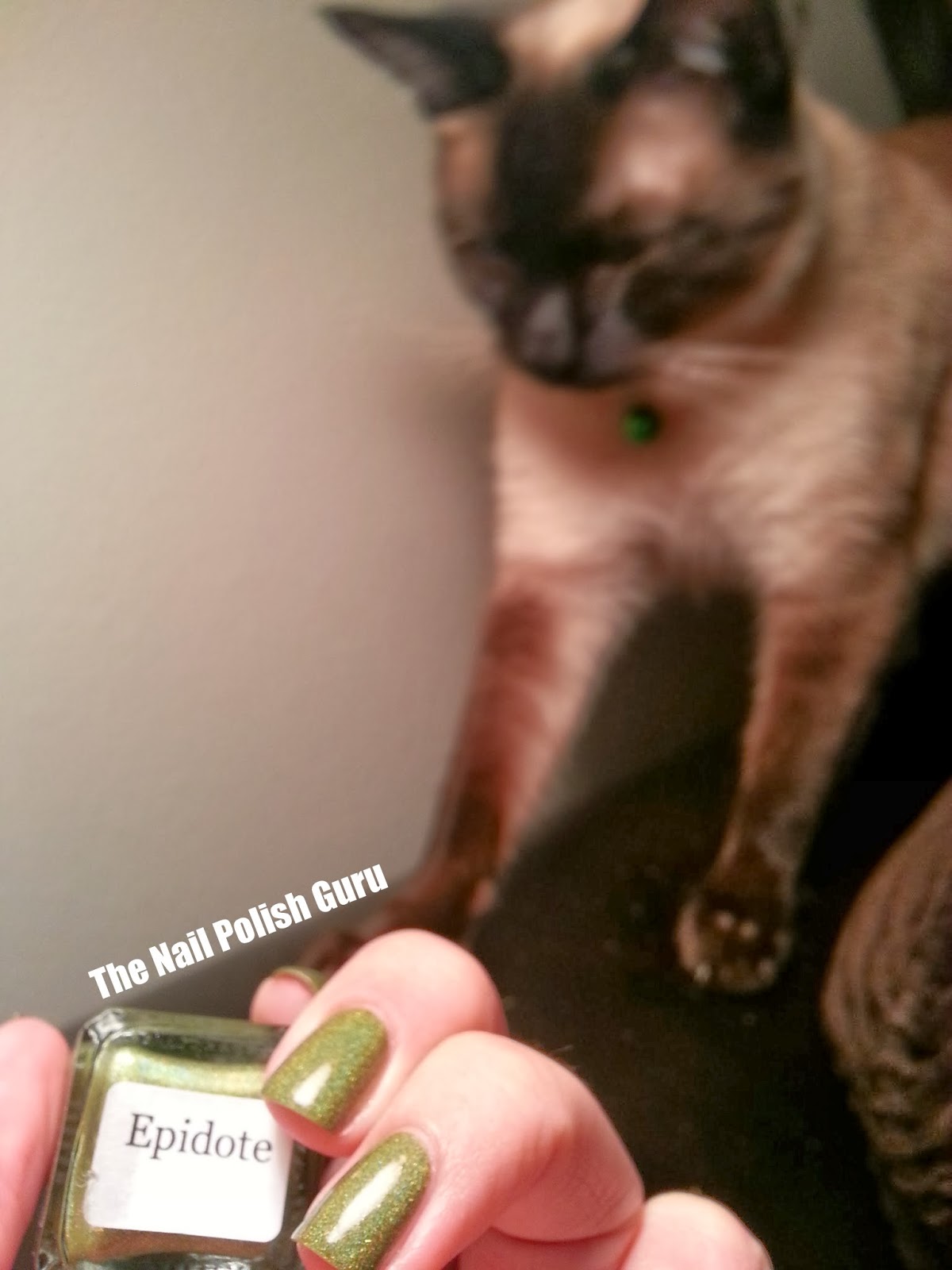 Oh and how about a bonus pic of my little helper! :)

I hope you all are enjoying your weekend! I had to work early yesterday morning, but I am finding I actually really love the morning shift! I get to work around 6:30 but am off at 2 so I have the whole rest of the day to do what I want! Love it! So weird for me though because I have never been a morning person! I had today off though so I spent some time doing dishes and planning some meals for the week and then back to work bright and early tomorrow! (more like dark and early!)

Today I am showing you yet another polish from Colors by Llarowe. Yes I realize I have been wearing a lot of these, but I truly love the formula and the holo has been amazing on nearly every one so far! And when we happen to get some sun I feel that I should take full advantage! :) Mojito is described as:

Shown is 2 coats of Mojito over Duri Rejuvacote and topped with HK Girl. As with most CbLs I could have gotten away with 1 coat. Flawless application as well! As you all know I love all shades of mint/seafoam/teal/jade and this of course was no exception! :)

I am a bit behind on posting! I forgot what it's like to have a job, not as much free time as usual, haha! Funny thing is I have actually been painting my nails more but just don't have as much time to be able to post. Thinking it's about time I do the Instagram thing and post my manis that way! I don't know though, I really do enjoy blogging!

Anyways today I have a beautiful holo to show you from CrowsToes! One Trick Pony is described as:

Shown is 2 coats of One Trick Pony over Duri Rejuvacote and topped with HK Girl. Application was great!  The holo is super strong and I was so happy to actually have some sunshine to take pictures in! The green didn't show up in my photos and it wasn't very visible even in person but it was there. A beautiful polish but it did end up in my swap/sell pile. It looks great in pictures but was actually too cool toned in person and made my skin look weird. Like dirty or something. Oh well, I can't keep them all! And even though it didn't suit my skin tone I know it will be a great addition to someone's collection! :)

Brittany Raquel
Welcome to my obsession! Here you will find swatches, reviews, hauls and more! Please contact me at britt.dub87@gmail.com if you would like me to provide a review of your product!